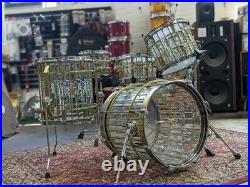 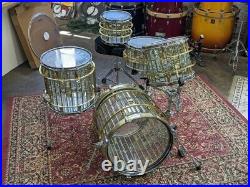 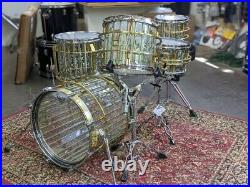 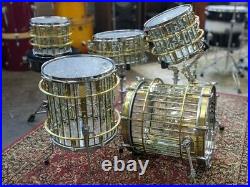 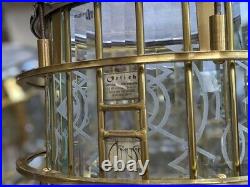 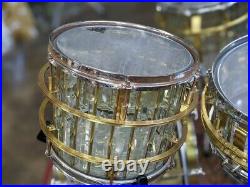 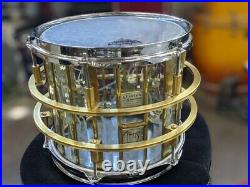 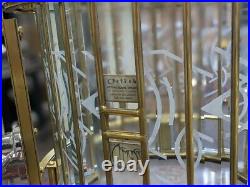 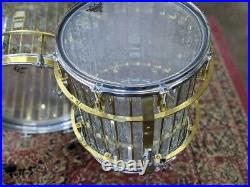 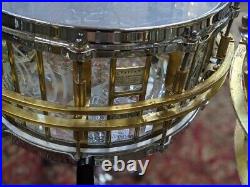 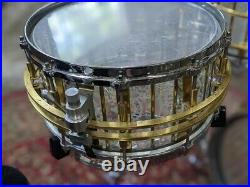 Orlich Beveled Art-Glass Drums 9×10″ Tom 10×12″ Tom 15×14″ Floor Tom 16×18″ Bass Drum 7×14 Snare Drum The glass on these drums are immaculate! Some areas of brass on these drums have a bit of rust and some minor denting of the brass. I tried my best to point that out in the pictures. Each drum is individually serialized and signed by John Orlich. John Orlich was a drummer moved by the British Invasion groups of the mid-1960s, and by the late-60s he was drumming for the Detroit-based Billboard-charting Stuart Avery Assemblage, who opened for period-classic bands such as The Yardbirds, Procol Harum, Spirit, and Alice Cooper (among others). Orlich had worked in glass since the late-70s, and began work on glass drums in 1988. To paraphrase Orlich. I had observed the wonderful musical properties that glass possessed – its a great resonator and doesnt flatten the sound at all, which was something Id observed and disliked in the then-new acrylic drums. Orlichs early experiments with entirely glass shells proved to create too many unwanted overtones – he felt the design needed just enough structural material to simultaneously dampen the unwanted overtones and hold the components together. To that end he devised a system of beveled art class panels (approximately one and one-half inches wide and three-sixteenths inches thick) with brass strips supporting each panel, with bearing edges of steel that attach perpendicular to the supporting brass, and two outer bands of brush-finished brass (Orlich referred to them as a lateral pressure system) which interface with the lugs, making for a free-floating brass and steel frame over a glass/brass shell. Early enthusiasts include Alan White of Yes. When I first got the snare it was very bright, but I found that I could really fine tune it to get it where I wanted it and it was the same when I got the whole kit – once I got it to where I wanted it, it started sounding really, really, really good. Its such a unique drum – its got such a crack to it, and you can have it at any volume level and it still comes through in the recording (he used the snare on the Yes album The Ladder in 1999) its very easy to get a pitch and level where it can be heard without having to turn it up in the mix. Ive always gotten a great feel out of that kit all of my drummer friends say it sounds absolutely amazing. The band Chicagos Tris Imboden had similar experiences with his Orlich snare drum. I couldnt believe how beautiful it was and how ingenious the construction was plenty of top-end AND warmth its got cut that redefines cut, and it records like crazy. In the early-2000s, artist, author, and musical instrument scholar Paul Schmidt was starting up his Art of Music Instruments projects (2004 – 2014) – Schmidt is most recognizable internationally for his books on Ludwig Drums (The History of the Ludwig Drum Company, Centerstream Publications, 1991), and DAngelico and DAquisto guitars (Acquired of the Angels, DHR Publishing, 3rd edition 2018), among others. He approached Orlich to collaborate on a special series of snare drums and kits with custom etching patterns on the inside of the shells. When I first saw Johns drums, they enthralled me; but they were also so far afield from my frame of reference that it took me awhile to digest them. I visited with Rob Cook (fellow drum historian) as I knew he had a snare drum, and he compared them to Roberto Spizzichinos cymbals – a very high level indeed. When I first played them, they struck me as being unlike anything Id played/heard before, which by that time had been a lot. Any newness takes time to acclimate, but the more I experienced and understood them, the more I enjoyed them. They had a different kind of character and tone colour – a beauty typified by vast sensitivity and musical ultra-clarity amidst a rich personality and engaging complexity – they were like diamonds floating through platinum on a balmy day of brilliance and smiles. The first drums of Orlich and Schmidts Art of Music series were exhibited at the 2007 Chicago Drum Show – several snare drums, and a solitary kit (meant to take orders from). After 30 years of building glass drums, Orlich retired the business in the late 2010s. In that multi-decade time frame he estimates he made less than twenty drum kits, making this kit not only a unique and ingenious musical work of art, but also a once-in-a-lifetime opportunity for a collector. (Additional perspectives from noted professionals about Orlichs glass drums). The drums are magnificent in concept, appearance, and sound. Theyre destined to become among the most collectible drums ever. (Rob Cook – internationally-recognized vintage drum historian). The Orlich snare drum is a truly unique and intriguing instrument. Its sensitive and musical. I like it a lot! (Tracy Davis – San Francisco Opera Company/freelance Classical percussionist). The item “Orlich Glass & Brass Etched The Art of Music 5pc Drum Set” is in sale since Wednesday, June 9, 2021. This item is in the category “Musical Instruments & Gear\Percussion\Drums\Sets & Kits”. The seller is “t_c_d_c” and is located in Minneapolis, Minnesota. This item can be shipped worldwide.